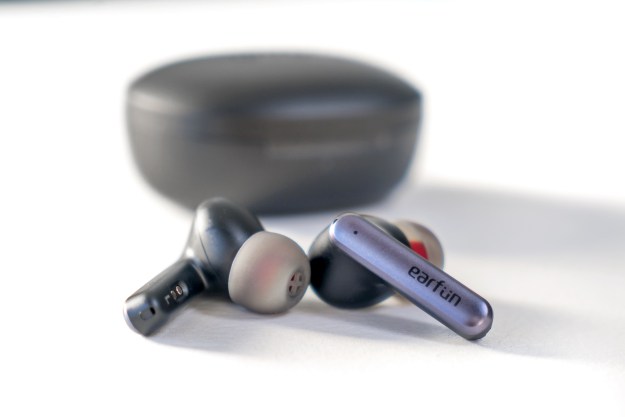 "Sound quality and noise-canceling beat many earbuds at twice this price."

EarFun is the kind of company that tries to take less of your money since it makes products of the cheap, cheerful, and affordable kind. That includes wireless earbuds , where it has always buttered its bread on undercutting competitors by offering good value relative to cost.

That's what the EarFun Air S are supposed to be, presenting a package of features for $70 that could make you feel like you got a great deal every time you put them on. Whether or not it's the kind of deal you would want to make depends on what compromises you're willing to accept.

What's in the box

EarFun includes four pairs of ear tips, from x-small to large, broadening the best possible fit options just enough for more listeners. You also get a short USB-C charging cable and a user manual. The other unique addition is a cleaning stick, whose purpose is to keep the magnetic connectors clean, thus avoiding any prospect of the earbuds not charging when you put them in the case.

As yet another pair of earbuds drawing inspiration from the AirPods, the Air S have stems with thicker buds, which is to say they bear a strong resemblance to many other affordable pairs out there. When I first unboxed them and examined the build and design, I kept thinking of brands like Anker, Soundpeats, Tribit, Edifier, and others — all of which routinely experiment with similar designs or form factors.

I found the build just right to stay in place for longer listening stretches.

That is to say, the Air S don't stand out for their looks, they stick to a familiar formula to keep things neutral. If you're not looking to turn any heads and just want the functionality, then you may care little about the aesthetics, but if you are looking for a little flash, I'm not sure these are it. To me, they're not bad, though I did find it off-putting that the EarFun logo appeared upside down on the left earbud.

The good thing is they are quite comfortable, and the eartip selection all but ensures it, as you're more than likely going to find a pair that suits you. Neither too thick nor too thin and slippery, I found the build just right to stay in place for longer listening stretches without feeling like they were about to fall out.

The onboard controls are plentiful but finicky to operate.

Mind you, they are a little delicate. Despite a matte finish, the earbuds and case showed scuffs and scratches more easily than I expected. The IPX5 protection is okay for the odd run or workout, though I would recommend vigilantly cleaning them after sweating with them on. They'll do a pretty good job staying in place while you move, but if they get slippery, you'll have to adjust them along the way.

The onboard controls are plentiful. Tap once on the right to raise the volume, once on the left to lower it. Twice to play/pause, three times on the right to skip a track. I was wondering why the manual omitted the triple tap to repeat a track on the left earbud, only to discover EarFun assigned that function to toggle Game mode on and off. Tap and hold on the right activates the phone's voice assistant, while doing it on the left toggles between active noise cancelation (ANC) and ambient mode. For calls, tapping twice answers or ends a call, while a triple tap can switch between two concurrent calls, which is pretty cool.

The only problem is those controls are finicky to the point where attempting that might inadvertently end both calls. It's the state of affairs across the board with the controls, which I found inconsistent and challenging to master. That's a shame since the EarFun app offers a way to customize what the controls do. Assuming the company issues a firmware update that might somehow fix that, it's a learning curve that will carry on for some time.

The one thing that's missing is wear sensors to let the buds auto-pause and resume your tunes when you remove/replace them from your ears. But that might be a nitpick at this price — many other budget models omit this feature in the interests of saving money.

The Air S support multipoint connections, albeit not quite as seamless as other earbuds do. I could pair to two devices at once, only switching between them is entirely manual, meaning the earbuds don't always switch from one device to another automatically. For instance, if I want to switch to listening to music on a phone from a tablet, I have to manually select the Air S in the Bluetooth menu. Tapping play on the phone doesn't wake the earbuds into action in any automatic way.

This might have been a problem with our review model — other reviewers haven't reported similar problems. Thankfully, in cases where it's music on one device, and a phone call on another, it stayed connected to the phone I was using for the call.

I like it when cheaper earbuds come with good app support, and EarFun does a good job with the Air S. I mentioned the customizable touch controls, and you can look forward to a pretty good set of EQ settings on top of that. It comes with four presets and a six-band EQ you can tinker with to create your own. The earbuds always remember the last preset you chose, keeping things consistent every time you take them out for a listen.

The Air S sound considerably better than the 3rd-Gen AirPods.

Under the settings, you can also go to Mode Switching and decide if you only want to toggle between ANC and Ambient, leaving Normal mode out, toggle between all three, or just stick to one. There is a toggle for Game mode, which reduces latency, and works well enough for gaming and watching shows or movies. Firmware updates route through the app, and I saw one come through during my testing. In my experience, EarFun has shown a willingness to support its products, so here's hoping that continues with the Air S.

A product tutorial and FAQ are also in there, along with a "How to Wear" section in case you need a refresher on how to get these buds to fit just right.

EarFun tuned the Air S to stick to a balanced soundstage, yet instead of skewing further toward the bass, as so many inexpensive earbuds do, these actually go easy on the lows. Bass response is flat from the start, never really hitting its stride unless you force the issue in the EQ. With middling mids, the highs stand out more, as I realized when playing around with the bands to see what kind of sound I could finagle via pure experimentation.

Despite the awkward beginnings, I found that boosting the bass and mids, while leaving the highs somewhat restrained delivered a pretty punchy sound, regardless of song or genre. It was more work to get there than I managed with the Anker Soundcore Life P3 or Soundpeats Air3 Pro, for example. Both of those came through with cleaner sound out of the box, and the Life P3 particularly stand out for Anker's excellent app support.

The irony, at least for me, is that the Air S sound considerably better than the more recent 3rd-Gen AirPods , mainly because the EQ presents wider audio flexibility, and the tighter fit keeps those tunes from leaking away from your ears. That puts the $70 price tag in greater perspective as a $100 savings over Apple's iconic earbuds. For the budget-conscious, the Air S would have to be a win, given the overall discrepancies I've observed. It also doesn't hurt that EarFun includes support for SBC, AAC, and aptX Bluetooth codecs, the latter of which aren't part of the AirPods' repertoire.

Canceling noise, letting it in

Not to keep beating up on the AirPods, but as they don't have ANC support, the Air S take another shot at being the value alternative. Noise cancellation on these earbuds impressed me, doing a very good job at blocking out low-frequency sounds in ways I haven't always noticed on earbuds at double the price. It struggles more with higher frequencies, and certain pitches will slip through the cracks, but all told, the results are definitely nothing to scoff at.

Incidentally, if you leave the controls as is, so that ANC turns on by tapping and holding the left bud for two seconds, it ends up being the most consistent of all the controls. I was able to easily toggle between ANC and ambient when I wanted to block out noise and when I needed to hear it.

Ambient mode is fine for what it is, adequate enough to hear the background or engage someone in conversation without removing the earbuds. I found it fitting and about right for a pair of earbuds in this price range, though I will give the Air S a nod for good phone call quality, especially in quieter settings. In louder environments, background sounds can get through, making calls more challenging on both sides.

EarFun won't be so much fun when it comes to battery life. It rates the Air S at up to six hours with ANC off, and five hours with it on. I can all but guarantee you won't hit those numbers. One reason is volume levels, where creeping it up will knock the battery down. It's the same with Game mode, if you end up using that, too. In my testing, I heard a verbal low battery warning — a nice touch — after about three hours and 45 minutes. That's with ANC on, or a mix of ANC and ambient.

By any measure, or any price, those aren't great numbers, and yet, they are right in line with the AirPods. What's interesting is the case, being noticeably bigger than that of the AirPods, carries another five charges. That's one more than Apple's, overall, but more importantly, a necessary feature because the Air S will be sitting in their cradles to charge often.

You get wireless charging, which is nice, though no fast charging ability. The earbuds will take about an hour to fully charge from empty once you've placed them in their case. There is fast charging, or at least what passes for it. EarFun claims the Air S can play for up to two hours on a 10-minute charge, but it's actually closer to 20 minutes. And the two hours is very elastic because the batteries in the earbuds are so sensitive to the features and volume levels you ultimately use.

What I found interesting about the EarFun Air S is they have tough competition from not-so-well-known brands in the same price bracket, while also standing out as solid alternatives to the popular AirPods. They may not have spatial audio, the best controls, or the clearest phone calls, but they sound better, cancel noise, fit tighter, and have an app with more customization.

For $70, it's hard to argue against that combination, and there's always the possibility the price drops to pile up the savings even more. Not bad for a pair of buds that aren't all that exceptional in a tight market, but it's also why the Soundcore Life P3 are a better bet if you're willing to pay a little extra for them.

EarFun Air S review: good, cheap earbuds with tons of features | Digital Trends have 2227 words, post on www.digitaltrends.com at October 2, 2022. This is cached page on ReZone. If you want remove this page, please contact us.