The former head of South Korean's National Intelligence Service (NIS), Park Jie-won, warned on Monday that North Korea would "likely" test a nuclear weapon prior to the American midterm elections in November in response to Seoul resuming military exercises with the United States.

Park, who served under leftist former President Moon Jae-in, claimed that Pyongyang was interested in proving that its nuclear weapons could fly into America, not just threaten South Korea and regional enemies to the communist regime.

Communist dictator Kim Jong-un boasted as recently as a month ago in public speeches that North Korea could allegedly use its nuclear weapons against its enemy states "at any time." North Korea has not conducted a nuclear test since 2017, however. North Korea conducted four of its six known nuclear tests under President Barack Obama, under whom current American President Joe Biden served as vice president.

Park, the former NIS chief, said during an interview on South Korea's KBS Radio on Monday that the North Koreans "are going to do it [a nuclear test or other provocation]" before November in part because of the restoration of the Ulchi Freedom Shield military exercises that Seoul and Washington are currently conducting for the first time in five years. Moon, Park's old boss, had canceled them in response to North Korean demands. 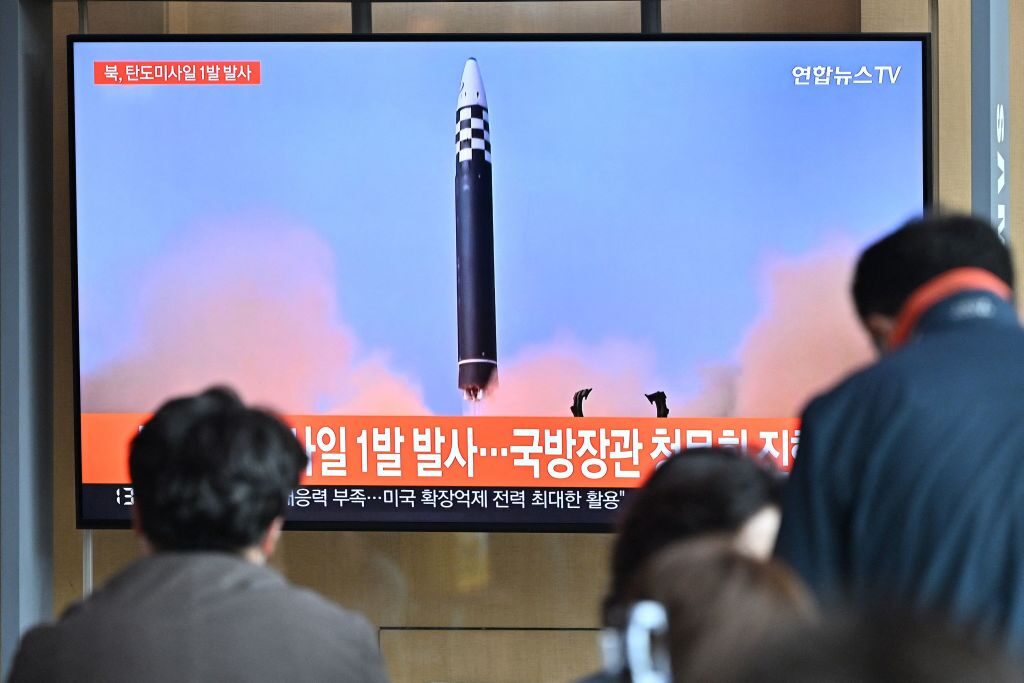 People watch a television screen showing a news broadcast with file footage of a North Korean missile test, at a railway station in Seoul on May 4, 2022. North Korea fired a ballistic missile on May 4, South Korea's military said, just a week after leader Kim Jong Un vowed to boost Pyongyang's nuclear arsenal at the "fastest possible speed". (Photo by Jung Yeon-je / AFP) (Photo by JUNG YEON-JE/AFP via Getty)

"Chairman Kim Jong-un is not going to overlook it as if nothing happened," Park said of the exercises, according to South Korea's Yonhap News Agency.

"They are going to do it in order to demonstrate a threat that its missile can fly to the U.S. carrying a miniaturized and lighter warhead, and to deal a blow to the Joe Biden administration ahead of the midterm elections," he claimed.

Active agents of the NIS made a similar prediction in May, claiming that North Korea had prepared a nuclear weapons test in anticipation of Biden visiting Seoul that month.

"We were told that there are signs of a missile launch even though the country is in the midst of the coronavirus pandemic, and with regard to a nuclear test, all preparations have been completed and they're gauging the timing," South Korean Rep. Ha Tae-keung told reporters after meeting with South Korean intelligence agents at the time.
"Our intelligence does reflect the genuine possibility that there will be either a further missile test, including long-range missile test, or a nuclear test," American National Security Adviser Jake Sullivan said at the time, "or frankly both in the days leading into, on or after the president's trip to the region."

Ultimately, no such test occurred, and North Korea ignored Biden's presence on the peninsula entirely, failing to mention it using its state propaganda arms.

Biden has long been one of North Korean state media's most aggressive targets. Pyongyang has regularly insulted him since his days as vice president, notably declaring in a 2019 editorial that Biden was a "rabid dog" who "must be beaten to death with a stick as quickly as possible."

North Korea has also used increasingly belligerent rhetoric against the government of the president who succeeded Moon, Yoon Suk-yeol. While a conservative, Yoon has paired restoring war games with America alongside an ambitious economic relief plan, which he offered this month to Pyongyang. In exchange for abandoning its nuclear weapons program, North Korea would receive "a large-scale program to provide food, providing assistance for establishing infrastructure for the production, transmission and distribution of electrical power, and carry out projects to modernize ports and airports to facilitate trade," Yoon announced . 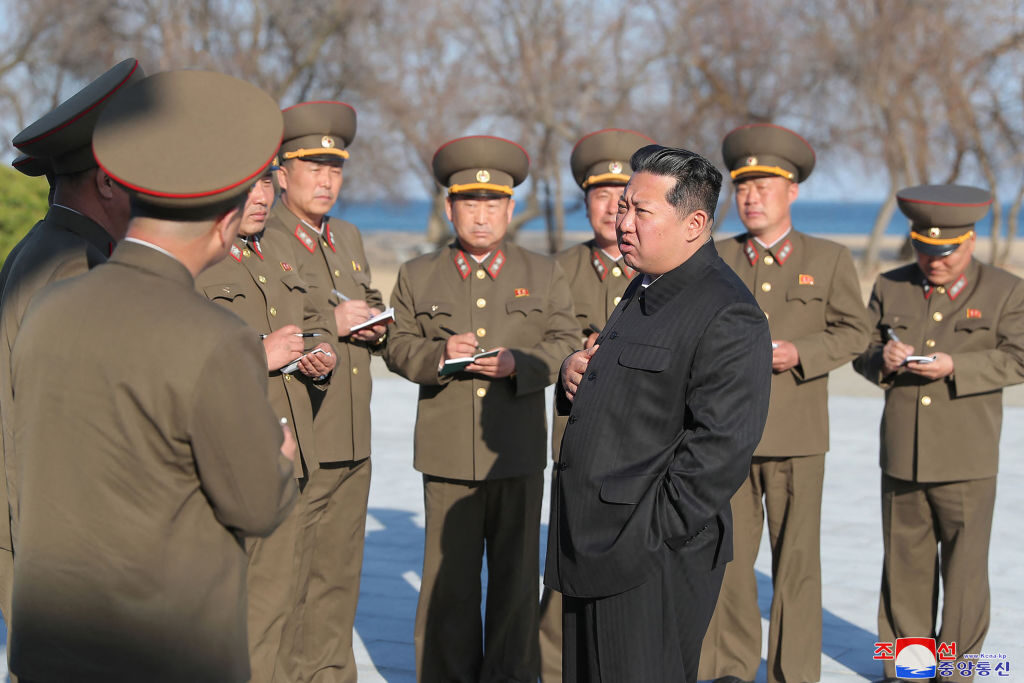 "I could not but be stunned by his 'bravery' and excessive ignorance," Kim Yo-jong said in a commentary published in North Korean government media. "All can not be bartered. To think that the plan to barter 'economic cooperation' for our honor, nukes, is the great dream, hope and plan of Yoon, we came to realize that he is really simple and still childish."

While North Korea has yet to conduct a nuclear test since 2017, Kim Jong-un recently claimed that it could use the weapons in a military context, not a test, at a moment's notice.

"Our armed forces are now fully prepared to cope with any sort of crisis, and our state's nuclear war deterrent is also fully ready to demonstrate its absolute power accurately and promptly true to its mission," Kim Jong-un said in a speech in July marking "Victory Day," the day that the Koreas and their allies in the Korean War, China and the United States, signed an armistice agreement ending active battle. While the North Koreans celebrate this as a victory, in reality, no side of that war ever surrendered or signed a peace treaty, meaning the war is still technically ongoing since 1950.

Kim mentioned the military exercises beginning this week during that speech in July.

"The United States, while describing all the usual actions of our armed forces as 'provocations' and 'threats,' is openly waging large-scale joint war games, which gravely threaten the security of our state," Kim observed. "Such a double-dealing behaviour is just that of a gangster, and this is driving the DPRK [North Korea]-US relations to a limiting point, a point of fierce collision, which cannot be reversed any further."

While abstaining from testing a nuclear bomb, North Korea has continued to test ballistic missiles, most recently testing an alleged new model called the "Hwasong-17" in May. Pyongyang claimed the Hwasong-17 is an intercontinental ballistic missile (ICBM), suggesting it could reach America. It debuted the weapon in a flashy photo shoot featuring Kim in a leather outfit clearly modeled after the American film Top Gun . 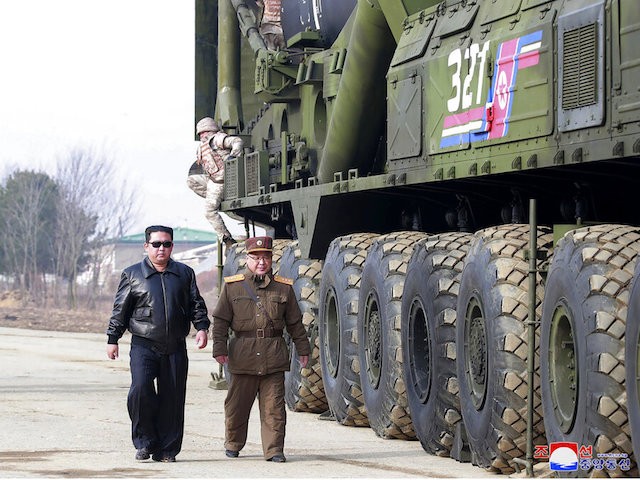 North Korea assumed the monthly chairmanship of the United Nations Conference on Disarmament the same month that it debut the alleged Hwasong-17 ICBM.

Ex-Seoul Intelligence Chief: North Korea 'Likely' to Test Nuclear Bomb Before U.S. Midterms have 1353 words, post on www.breitbart.com at August 23, 2022. This is cached page on ReZone. If you want remove this page, please contact us.