As thousands of SC Freiburg supporters strolled up Reichsstraße towards Berlin’s Olympic Stadium, singing, drinking and letting off flares, one fan broke ranks to slap a sticker on a bus stop.

“A club doesn’t belong to one person,” the sticker read, a quote alongside an image of iconic Freiburg coach Christian Streich. “The club belongs to the members and the people who identify with it.”

It’s a concept which, in many places across the football world in 2022, is little more than abtract lip-service. The fans tell themselves their clubs are “theirs,” but they’re not really; they belong to wealthy businesspeople, investors or, nowadays, sovereign wealth funds.

But not in Germany, where the 50+1 rule still holds sway. And certainly not at SC Freiburg, a club owned entirely by its 35,000 members . It’s a tradition of members’ associations – or Vereine – which goes back to the 19th century, and which still underpins the entire culture of German football today.

That changed on Saturday night when RB Leipzig won the German Cup, their first major trophy.

Because RB Leipzig doesn’t belong to its members; it belongs entirely to Red Bull. Its primary purpose isn’t to promote the sport of football for democratically organized members; it is to promote Red Bull. Football is just the means.

Does that matter? After all, Domenico Tedesco ‘s team of expensively assembled players play attractive, successful football – even when down to ten men and a goal down in a cup final, as they did for over an hour on Saturday, rallying, equalizing and taking the game to extra-time before winning on penalties.

Why should anyone care about the corporate structures behind it all? The 25,000 RB Leipzig fans, some of whom may have followed the team through thick (two previous cup final defeats and last month’s Europa League exit) and thin (the rest of the team’s 13-year existence), certainly don’t appear to.

“Mimimimimimi,” read one banner unveiled after Ermedin Demirovic’s decisive penalty had crashed off the bar to hand RB the cup. It’s the German equivalent of the childish “wah, wah, wah, stop crying” sentiment, and it appears to be the default response to criticism or rejection of the Red Bull model within the Leipzig bubble.

In the world of RB Leipzig, the mentality cultivated both by the club itself and by the uncritical local media which surround it, is a siege mentality.

Criticism only ever comes from the outside, from the others, from the footballing establishment all conspiring to keep plucky little RB Leipzig down out or jealousy, envy or fear.

And it is only ever expressed by an extreme, intolerant minority – namely the ultras, such as those of SC Freiburg who, as the RB Leipzig players collected their winners’ medals and lifted the trophy, unveiled a huge banner reading simply: “Scheiss Red Bull.”

Nevermind the fact that those very same Freiburg ultras had also distributed flyers around the Olympic Stadium pre-match explaining at length and in detail precisely what their issues with Red Bull and RB Leipzig are: circumvention of regulations, prevention of participatory membership, multiple club ownership, financial doping and distortion of the competition, among other things.

Still, football never exists in a vacuum, not even in Leipzig – a city in a region which has already proven fertile ground for the cultivation of a particular mentality which isn’t limited to sport.

“Everyone against RB Leipzig,” ran the headline of a feature in the local Leipziger Volkszeitung (LVZ) ahead of the final. “Even when it’s going well on the pitch, the club is constantly humiliated and derided publicly. The feeling is familiar to many in the East.”

The message is simple: criticism of RB is not really about circumvention of regulations, marketing, distortion of the competition or the undermining of German fan culture; it’s because the world is against “the East.”

But Red Bull, a global energy drink and lifestyle brand based in Austria, is on your side – just as it was when it was originally looking to take over Fortuna Düsseldorf, St. Pauli or 1860 Munich before eventually settling on Leipzig.

Dietrich Mateschitz perhaps couldn’t have known it at the time, but he’d struck gold in more ways than one. Not only did Leipzig have a brand new World Cup stadium with no professional team to play in it, it also had a clientel susceptible to the idea that the whole world is against them.

It was no coincidence that this very trope was also taken up post-match by Tino Chrupalla, a politician from the far-right Alternative für Deutschland (AfD) party, who took to Twitter to congratulate RB in a very particular way:

“Handball not punished, penalty not given,” he tweeted, referring to Roland Sallai’s unintentional use of his hand in the build-up to Freiburg’s opener and Dani Olmo’s extra-time penalty claim. “But Saxon fortitude and Austrian entrepreneurial spirit won out against political correctness.” 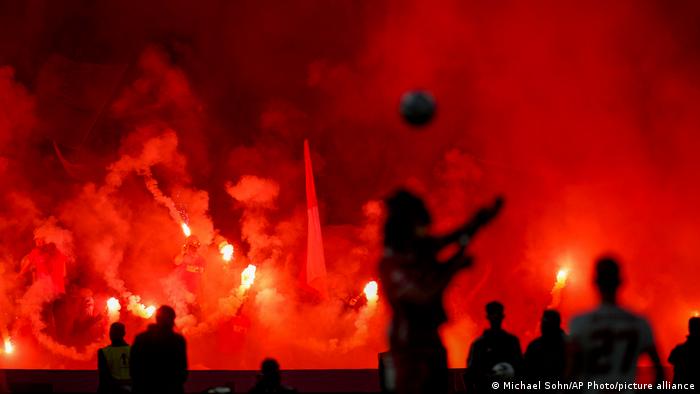 The German Cup final was a clash of German football cultures

Just as the populist AfD has won support in Saxony and other regions of eastern Germany by telling voters that everyone else – the western German establishment, the elites, the media, the others up there, somewhere – are conspiring to keep them down, so RB Leipzig’s misfortune could be explained not by the decisions of the video assistant referee, but by the imposition of some vague concept of an undesirable “political correctness,” whatever that means.

And so, logically, RB Leipzig’s eventual triumph could only be a result of some special, innate, unique steadfastness only found in the Free State of Saxony which was only waiting to be activated by a shot of taurine from Fuschl-am-See.

In reality, it’s dangerous nonsense. RB Leipzig’s victory was due, on the night at least, to a team of great quality which managed to dig deep and stay in the game even when reduced to ten men and when Freiburg efforts were coming back of the post and the bar.

Over the course of this season, it was due to Domenico Tedesco, the impressive and articulate head coach who has revolutionized RB’s season since taking over in December.

When down to ten men, the obvious choice might have been to sit back and stick the big man up front to provide an outlet once or twice. But Tedesco took Andre Silva off, brought on Dominik Szoboszlai and later Dani Olmo, and moved Christopher Nkunku up front as RB played out the rest of the game without a recognized striker. It would be grossly unfair to allow Tedesco’s achievement and that of his players to be tarnished by association with the unpleasant mentality cultivated around them. A degree of differentiation and separation is necessary, and credit should be given where it’s due.

Ultimately, however, in the longer term, RB Leipzig’s first major trophy, and indeed any more that may follow, remains a direct result of the unfair advantages and rule breaking pointed out by the SC Freiburg ultras and countless others in the game over the past 13 years.

The stadium announcer may have congratulated “the Saxons” at full-time, and the name “Leipzig” may have been engraved on the cup. But it has nothing to do with either, and everything to do with a global brand using the platform of professional football to market itself, using methods and means which aren’t available to the rest of the competition.

Mimimimi. Then again, if fans of RB Leipzig don’t care, perhaps that Freiburg sticker on the bus stop contained more truth than its creator intended.

RB Leipzig's first major trophy: 'The club belongs to the people who identify with it' have 2489 words, post on www.dw.com at January 21, 2022. This is cached page on ReZone. If you want remove this page, please contact us.