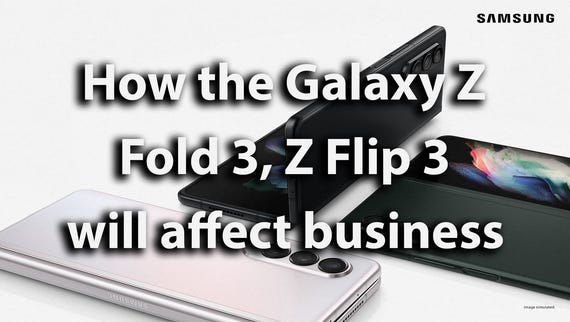 Samsung is betting that it can make its pair of foldable devices — Galaxy Z Fold 3 and Galaxy Z Flip 3 — mainstream flagship devices, but will need to perfectly balance performance, durability and price.

Also: Samsung Galaxy Z Fold 3 and Z Flip 3: How to pre-order and get the best deal

At Samsung’s August Unpacked event, the consumer electronics giant is expected to make its case for foldables, which represent the company’s focus in the years to come. Samsung should have its Z Fold and Z Flip devices refined enough to warrant consideration. Let’s face it: The first versions of Samsung’s foldable devices were glorified betas. The latest revs of Samsung’s foldable devices improved dramatically , but still required too many concessions for a high price point.

The rule of thumb is that the third versions of new products are solid enough for the masses. Enter Samsung and its foldable ecosystem with S Pen support.

For Samsung’s Unpacked event to be recognized for what it doesn’t have (Galaxy Note) it will need to deliver a refined foldable design, better camera specifications, 5G and differentiation at prices that rhyme with other flagships.

On Samsung’s recent second quarter earnings conference call, executives laid out the importance of foldables to the company. Executives said they were going to promote foldable devices in a big way to prime sales. The goal: “Increase volume to achieve economies of scale” and optimize design to hit solid profitability.

Research firm Strategy Analytics has projected that foldable smartphone shipments will grow from less than 1 million units in 2019 to 100 million by 2025. Strategy Analytics projection is a bet that smartphone makers will solve initial problems with unaffordable prices, low display yields and durability.

My expectations for Samsung’s Unpacked event are that the company will close the camera gap between its foldable devices and its Galaxy S flagships. But price will tell the tale.

For Samsung’s foldable devices to go mainstream and reach true volume shipments either the Galaxy Z Flip 3 or Galaxy Z Fold 3 (or both) need to be near the $1,000 mark. At that price point, foldables will truly be in the flagship conversation.

The Monday Morning Opener is our opening salvo for the week in tech. Since we run a global site, this editorial publishes on Monday at 8:00am AEST in Sydney, Australia, which is 6:00pm Eastern Time on Sunday in the US. It is written by a member of ZDNet’s global editorial board, which is comprised of our lead editors across Asia, Australia, Europe, and North America.

Samsung's big mission: Take foldable devices -- Galaxy Z Fold 3 and Z Flip 3 -- mainstream have 806 words, post on www.zdnet.com at August 8, 2021. This is cached page on ReZone. If you want remove this page, please contact us.