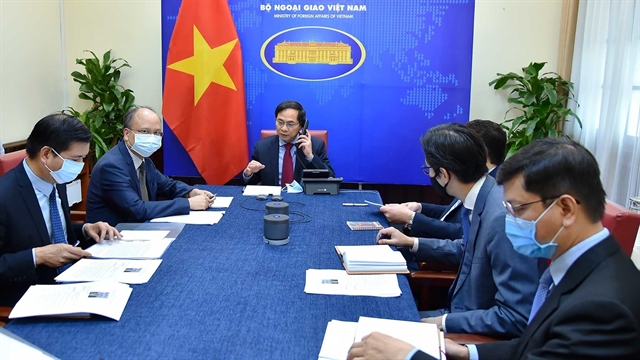 During his phone talks with the Russian minister, Sơn said Russia is among Việt Nam's most important partners in foreign policy, and congratulated the country on its success in containing COVID-19, especially in vaccine research and production.

Despite the pandemic, Việt Nam and Russia have maintained exchanges, with many phone talks held between high-ranking leaders, contributing to promoting bilateral ties, Sơn said.

Both expressed their hope to successfully organise activities during the Việt Nam-Russia and Russia-Việt Nam Year in 2021.

Minister Sơn thanked Russia for supporting Việt Nam's ASEAN Chairmanship in 2020, and non-permanent membership of the UNSC for 2020-2021.

Việt Nam is willing to work with Russia and other ASEAN countries to organise activities marking the 25th anniversary of the ASEAN-Russia relations (1996-2021), Sơn said.

For his part, the Russian minister lauded Việt Nam's performance in external affairs, as well as the country's increasingly impressive role in the regional and international arena.

Lavrov invited Sơn to visit Russia at a convenient time and the Vietnamese minister accepted the invitation with pleasure. — VNS

Việt Nam treasures comprehensive strategic partnership with Russia have 368 words, post on vietnamnews.vn at April 28, 2021. This is cached page on ReZone. If you want remove this page, please contact us.